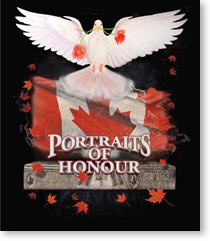 About :: About the Artist, Dave Sopha 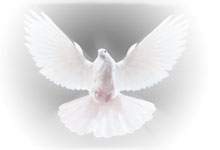 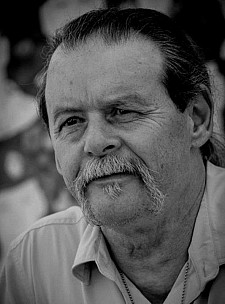 Dave Sopha has been a professional airbrushing artist for the past 45 years. He discovered his artistic talent during an eight-month recovery following a car accident in 1970 that left him with a broken back. The Portraits of Honour mural is Dave’s first excursionin to the world of oil painting.

Dave has had an extensive career supporting military and veterans across the country receiving numerous awards for his work. Dave was honoured in Ottawa with the Queens Diamond Jubilee Metal. He received the Minister of Veteran affairs Commendation in Charlottown PEI. He received Kinsmen’s Hal Rogers Fellow, The Rotary’s Paul Harris Fellow and the Kiwanis Walter Zeller Fellow and has the Toastmasters International Communication and Leadership award. Dave is a Life Member of Kin Canada, Life Member of the Canadian Air Force, 428 Wing. A Life member of the Nato Veterans Organization of Canada, A Life member of CAV Canadian Army Veterans motorcycle unit, A Life Member of UN Nato Veterans Canada Motor cycle Unit, and a life member of the Hamilton Warplane Heritage Museum, a honorary member of the Canadian Rangers. He was awarded a Citizen of the year for 2003 in Cambridge. A Bernice Adams Memorial award winner, A Cambridge Chamber of commerce Keith Taylor Memorial Award winner, and awarded Cambridge’s Art and Cultural award. The Mayor of the city of Calgary made him an honorary Calgarian.

Dave has been a proud member of both the Preston Kinsmen for the past 33 years. And the Preston Legion branch 126 for 13 years.

In 2011 Dave his wife Penny and a crew of six traveled across Canada from coast to coast with the Portraits of Honour, a 10 foot by 40 foot canvas oil painting, which features the faces of all of our Canadian troops killed in Afghanistan. With the help of Kin Canada, they raised much needed funds in support of our military families and those returning home from Afghanistan with physical and emotional injuries, while bring Canadians together to remember, honour and celebrate our Canadian forces.
Born in Toronto, Dave and his family moved to Cambridge Ont. 34 years ago. Married to Penny his wife of 44 years. They have one son and three daughters, as well as 14 grandchildren and 4 great grandchildren.